The nature trail forms 7 kilometres long loop with 14 stops. On each stop there is a board informing about natural and cultural qualities of the sand pits and surrounding landscape.

Wet sands are stabilised by algae and inhabited  by mosses and bog vegetation. Common is carnivorous plant Round-leafed Sundew. Other rare plants can be also found on drier places.

The Třeboň Region Protected Landscape Area and the Biosphere Reserve

The Třeboň Region has been incorporated into the network of Biosphere Reserves of UNESCO as region of exceptional natural and cultural importance. In 1979 it was declared as Protected Landscape with area of 700 square kilometres. Part of the fish pond networks were included among wetlands of international importance in 1990. This convention has protected major part of Třeboň bogs since 1993.

Areas devastated by sand exploitation are colonised by Sand Martins and Kingfishers. Hoopoes regularly breed in South Bohemia only in the large sand pits of the Třeboň region. Abundance of insects is necessary for habitats of Sand Lizards and Natterjack Toads. Rare plant species live at bottoms of borrow pits and sand pits.

Rare wild bee appears here on sandy roads already during March. It forms here one of the largest colonies in Bohemia.

The Vlkov area is known among botanists due to appearance of rare weed communities. Beside number of rare and critically endangered plant species only here grows Parsley Piert, extinct elsewhere in the Central Europe. In order to preserve the endangered species a regular crop alternation with complete exclusion of fertilisation and herbicides is necessary.

Nature reserve with area of 2 km² and height of 4-6 metres above the surrounding ground. The area has been protected since 1954 due to its characteristic shape, rare vegetation and fauna.

Number of man-made sand pits, clay pits and quarries were formed during the settlement of the Třeboň Region. Till the half of the 20th century the sand was excavated in the area between Veselí nad Lužnicí and Vlkov only in small surface pits, above the ground water level. Underwater mining was started in 1952. In the sand a number of moldavites were found and abundant are also broken pieces of ceramics. This proves that the region was inhabited already during early and late Stone Age.

Incorporation of lakes into the landscape

At several places in the Třeboň Region the exploitation of gravel sands caused disappearance of plant and animal species (Pale Pasque Flower, Sweet Mezereon). Present economic use of the lakes is disputable also for their decreased capacity of biological self-purification. The exploited sand lakes are increasingly used for recreation.

The importance of shrubs

Trees and shrubs that spontaneously grew on the shores of the gravel lakes are important not only for their aesthetic significance, but also for biological, hygienic and cultural significance in the open landscape.

The importance of trees outside of woods

Number of old and big trees form dominants in the landscape and create habitats for survival of important and endangered flora and fauna and in this way help to preserve species diversity in the Třeboň Region.

Ancient waterworks from the beginning of the 16th century. The canal was designed and major part built by Štěpánek Netolický. The Golden Canal is still fully functional and supplies fish ponds with fresh water. During its almost 46 kilometres long journey it does not loose necessary height gradient, although the height difference between its neck near Pilař and its mouth before Veselí nad Lužnicí is only 31 metres, that is drop of 0,7 metre per one kilometre.

The world of glittering wings

During the sunny and warm summer day one cannot overlook dragonflies close to the open water surface. Common on leaves of riverine vegetation are Blue Damselfly with dark blue wings. The most common is tiny, light brown White-legged Damselfly and whole number of blue Damselflies - Azure, Northern and Common Blue ones. 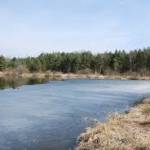 Sahara in the Třeboň region. 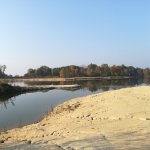 Five separate gravel sand lakes spread through the PLA and the Třeboňsko Biosphere Reserve, situated between the town of Veselí nad ...