The South Bohemian town of Třeboň is a lovely old town with approximately 8,500 inhabitants. It is situated near the Austrian border, between České Budějovice and Jindřichův Hradec, in the charming, slightly undulating landscape of the Třeboň basin, in a landscape of deep forests, large meadows and countless big and small fish ponds. 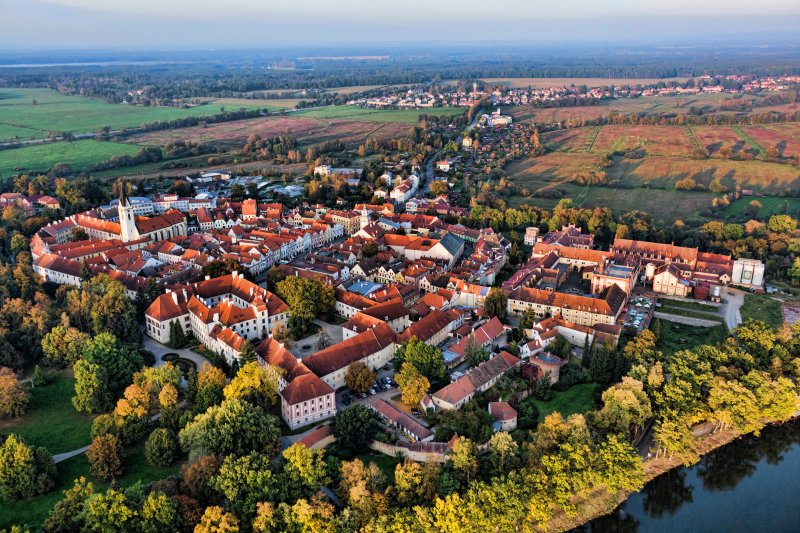 For the unique beauty of its historical centre Třeboň was declared an urban conservation area in 1976 and since 1960 it has the status of spa town. Thanks to its cultural and spa tradition, its richness of historical monuments and natural beauties and its location amidst the Protected Landscape Area (CHKO) Třeboňsko and UNESCO Biosphere Reserve it has become one of the most popular destinations for tourists both from home and abroad, as well as one of the most popular destinations within the Czech Republic.

The town of Třeboň has 8 local parts. Six of them – Branná, Břilice, Holičky, Nová Hlína, Přeseka, and Stará Hlína, are villages affiliated to the town. The town itself is divided into two areas Třeboň I, including the historical centre and the area eastwards, and Třeboň II, stretching towards the south and north-west.

Coat of arms of Třeboň

The original town coat of arms of Třeboň was documented on seals as early as the 14th century. It gained its present appearance in 1556. On the blue background there is a low silver castle wall with crenellation. Above the wall there are two silver towers. Each of the towers has a high Gothic window in its lower part and two smaller windows in the upper part, battlements and a red roof with a golden finial. Between the towers above the wall there is a silver shield with the Rosenberg five-petalled red rose and the same sign is also on the banner.